Classroom Conversations: To Kill a Mockingbird and the Discussion of Privilege 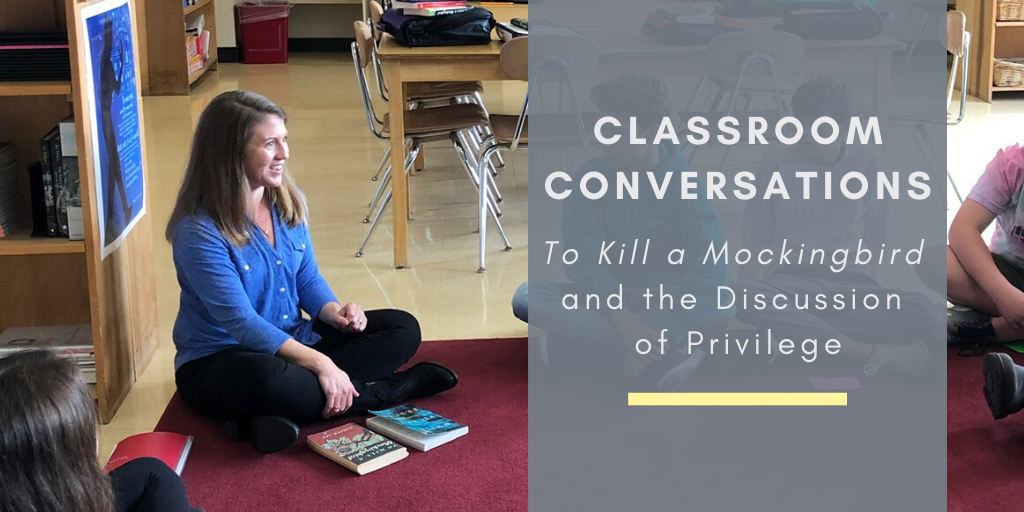 When I was asked to have classroom conversations with a group of 8th grade students about To Kill a Mockingbird in conjunction with White Picket Fences and the discussion of privilege, I said yes without hesitation. Here’s why!

I first read To Kill a Mockingbird when I was in middle school. I had recently moved from a small town in North Carolina to a suburb of New York City, and this book that took me back into the South became beloved. At some point I noticed the injustice at the heart of this courtroom drama, and I wrestled with Harper Lee’s characterization of African Americans and the “white savior” portrayed through Atticus Finch. But at first I think I simply loved it because it reminded me of my childhood.

So when I was asked to speak with a group of 8th grade students about To Kill a Mockingbird in conjunction with White Picket Fences, I said yes without hesitation. I was eager for the chance to read it again, and I was eager to hear what these young people had to say.

They read chapter five of White Picket Fences (and all of TKaM) in preparation for my visit. In that chapter, I move from North Carolina to Connecticut, and I recognize a few things about the distinctions between the culture of the North and the South, at least in my experience.

As I write in White Picket Fences:

“The northerners talking about southern racism were naming something true, but they were doing it from a distance. My classmates were right to insist that African American people deserved equal treatment under the law and desegregated schools and social systems. But my new friends also ran the risk of caricaturing the white people in the South, losing their complexity, their capacity for both good and evil. What’s more, in distancing themselves from the white people in the South, they failed to see their own legacy of complicity in a system of inequality.”

When I arrived in the classroom, I sat down on a large carpet square with two different classes of eighth graders to talk about racism and history and living up North. I told them a little bit of my story. They asked questions like, “How do you think your background from both the North and the South benefits you in understanding complicated racial problems?” and “In what way do you think banal evil still exists in modern day Connecticut?” and “When you said that you grew up ignorant during your childhood, do you ever think that you were just as bad as everyone else by being ignorant?”

The conversation offered a chance to make connections–between the North and the South, between this present moment and this story from long ago and far away. It gave the students a chance to reflect on their own participation in systems that perpetuate racism even now. I hope it gave them a sense of compassion for people they might easily dismiss as bigots.

I thought I would reread To Kill a Mockingbird and conclude that it was outdated, but now that I have read it again and discussed it with these students, I’m not so sure. I certainly think it should be read with a critical eye–students need to understand the context in which this book was written, consider why it holds up a white man as a hero, and ask whether it would have sold so many millions of copies without that central white savior. And I would love for students to read it alongside Roll of Thunder Hear My Cry, so that another young girl from the South–and this time, an African American girl–could speak to the intricacies of life within an unjust system. But the book still sparked an important conversation about justice and power, racism and evil, and our common humanity, white and black, rich and poor, North and South.

It was a gift to me to see how my story, which was itself shaped in some ways by To Kill a Mockingbird, could also help students understand that book and its implications for our present moment. I hope it gave these students a sense of the complexity of the harm of injustice as well as a sense of the possibilities set before them to engage in healing that harm.