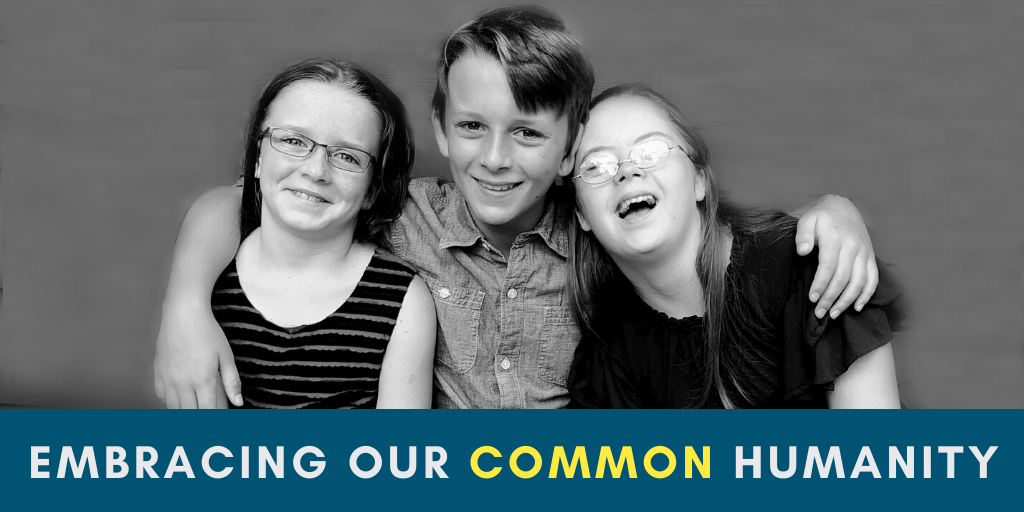 When our daughter Penny was born and diagnosed with Down syndrome, I thought her intellectual disability meant we were fundamentally different from one another.

At the same time, it was clear that we were literally bound to one another. She gazed up at me with big blue eyes that mirrored my own, with her dad’s long eyelashes and his black hair. Our genetic material comprised every cell of her body, and our home environment would shape every day of her young life.

When Penny was born, I also said that all human beings were created in “God’s image.” We shared a spiritual essence, not just a physical one. But with this diagnosis of Down syndrome, I also felt as though there was a separation. I felt as though my daughter was in another category of human being. Her birth prompted what I called “ugly grief.” It exposed ugly parts of my soul. It forced me to see that I carried bigotry against whole groups of human beings as well as a sense of my own superiority. Penny’s birth helped me see that I carried prejudice against people with intellectual disabilities, which led to the realization that I also carried prejudice against people who didn’t have the same education and opportunities as I did. I hated seeing this truth about myself.

Underneath the guilt and grief and prejudice was the love that fuels existence, the love that created each one of us, the love that sustains us and binds us together, the love that continues to beckon all of us to face the ugliness within our souls, receive forgiveness and grace, and turn back towards that loving embrace.

As I write in White Picket Fences,

“Love existed from the beginning, and love exists eternally. . . As much as brokenness defines our identities and our world right now, deeper still is our common identity as those who are loved.”

Over time, I came to understand that Penny and I didn’t simply share a genetic code. We shared a common humanity, as people who are limited, broken, and beloved.

It took me a while to see the difference between limitations and brokenness, but eventually I realized that every human being has both. Brokenness is everything wrong with the world. Brokenness encompasses all the ways we turn away from love, away from God, away from caring relationships with one another. Brokenness leads to suffering and separation.

Limits, the ways in which we are vulnerable and needy, are God-given. They remind us that we are creatures, not gods. They prompt us to reach out to others, to connect, to recognize our interdependence, to recognize our need for God.

Penny’s limits were more obvious than mine, both because she was an infant and also because she had Down syndrome. But her obvious limits helped me begin to recognize my own, and the ways that I tried to mask them. When I refused to rest, when I insisted on achieving more, when I kept striving and striving, I was pretending I was superhuman, utterly independent, indestructible. Recognizing myself as a needy, vulnerable human being pushed me towards receiving help from God and from others. Acknowledging my own limits led me towards love.

Before Penny was born, I would have said that I was connected to other people no matter their race, religion, ethnicity, or ability. But my experience of giving birth to Penny helped me see that this theoretical statement was not the way I lived my life. Penny helped me begin to live what I believe, which meant understanding my own neediness, my own belovedness, and looking for those same things in everyone else I encounter.

Penny still has obvious limits. She struggles to manipulate her little fingers to close a button. She struggles to understand abstract concepts. Some people find it difficult to understand her speech. Penny also has brokenness. She can be selfish. She can be mean to her siblings. She lies to protect herself (She also often comes back to me in the evening and says, “Mom. I need to confess.”). She experiences the effects of brokenness in other people with the sting of loneliness and rejection.

And Penny has gifts. She is created in the image of the God who is love, and she has her own particular ways to offer God’s love to the world. She is a peacemaker, always looking to bring resolution to conflict. Most recently, after a hubbub at school over a new technology use policy, she decided she needed to convince the administrators to gather the entire 8th grade so they could work it out. She is an encourager. She loves cheering other people on. She has qualities of patience, gentleness, and perseverance that point me back to the one who loves us both.

When it comes to racial conflict, socio-economic barriers, differences in ability, and on down the list of potential divisions, I have learned to look first for what holds us together. There is much structural work that needs to be done in order to change unjust systems so that diverse groups have equal opportunities for education and employment and safety. Embracing our common humanity is not a way to sidestep the realities of injustice. Rather, that common humanity is a starting point to motivate all people to make those changes. Instead of feeling threatened by difference, difference can become an invitation to better understand the wideness, wonder, and beauty of love.

PrevPreviousClassroom Conversations: To Kill a Mockingbird and the Discussion of Privilege
NextHow a Baby with Down Syndrome from Brazil Is Changing Lives in ZambiaNext