The 1619 Project and True History 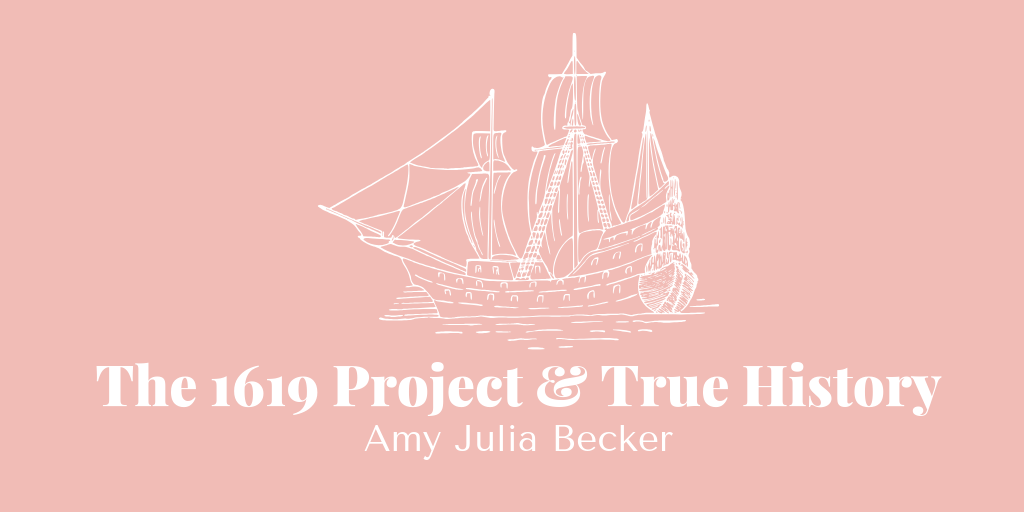 Perhaps, like me, you’ve read the New York Times 1619 Project or listened to the podcast. I’ve appreciated the thoughts and conversations they have sparked around the ongoing legacy of slavery and the founding of our nation. As someone who has been thinking and writing a lot about race, racism, and privilege this past year (not only in my book White Picket Fences but also on my blog), I continue to wrestle with how to understand and think about American history. I invite you to join with me in considering our past so that we might move towards healing the wounds in our nation.

My (Whitewashed) Version of US History

I loved the history of the United States as a child. I read biographies of Jefferson and Washington and Betsy Ross. I enjoyed field trips to colonial Williamsburg and family trips to Washington, D.C. and Boston. I loved feeling as though I was connected to great people who had done great things for the world.

I first learned that history in a small town in North Carolina. In school, and through the placards near historical locations around town, we learned what there was to commend. We didn’t learn much about slavery or the Civil Rights movement. Recently, I went back to reread my fourth grade history textbook, and I found only three veiled references to slavery among the 350 pages. That textbook stands as a reminder of how white Americans have tried to ignore slavery and its effects for centuries.

Even when I was older and living in Connecticut, I was taught that white Europeans established this nation with high ideals that “just took time to realize.” The year 1776 was engrained in my memory. 1776 called for celebration. It was a way to remember that which defined me as an American: Liberty. Justice. Equality. Freedom.

I never heard anything about the year 1619.

According to its statement of purpose, The New York Times’ 1619 Project seeks to “reframe” America’s history by placing the “true founding” of this nation 400 years ago. In the year 1619, the first people from Africa were sold as slaves to Europeans in what we now call Virginia. The Project seeks to articulate the legacy of that moment, a moment which precipitated hundreds of thousands of additional women, men, and children being sold and enslaved on these shores and millions more subsequently born into slavery.

Perhaps what makes the 1619 Project both compelling and controversial is that it claims America was founded upon slavery, not upon the ideals of liberty and justice for all.

I began reading the various articles written for this project without paying attention to its stated mission. I dove right into Nikole Hannah-Jones’ riveting account of her father’s insistence on flying the American flag outside their home. As an African American military veteran, her dad knew that he had every right to be treated with the ideals that flag represented. Flying it was a proclamation of the injustices he experienced as much as it was a challenge for this nation to live up to its principles.

Hannah-Jones connects her family’s story to the larger narrative of the United States. She writes, “the year 1619 is as important to the American story as 1776. . . [B]lack Americans, as much as those men cast in alabaster in the nation’s capital, are this nation’s true “founding fathers.”

As I continued to read (and listen to the 1619 podcast that corresponds with them), I learned more about the influence of African Americans upon the music of this land, about the way prejudice against African Americans has affected health care for all Americans, and about the economic role slavery played in forming this new nation. In other words, I learned more and more about how the enslaved people who were brought here 400 years ago formed and shaped this nation.

I am grateful for the chance to listen and read these stories precisely because of that very discomfort and the 1619 Project’s insistence that I consider the longer and fuller story of this America I call my own.

What Is Our True History?

What is the foundational story of these United States? Upon what were we established? What holds and supports the beams and stones where we continue to build? Was 1619 and the legacy of slavery our “true founding”? Was 1776 with its idealistic vision of government by the people and for the people?

As I write in White Picket Fences:

“There are two ways of seeing my heritage as a white American–as those who have perpetrated years of unjust oppression of native peoples and African Americans and immigrants, or as the founders of modern society with its celebration of liberty and justice for all. I have always thought I had to choose. If I am grateful for my town, my family, my history, then I must not critique it. And if I name the ugliness inside that history, I forfeit the right to be grateful. I am starting to believe that both must be true . . .”

Again, I am starting to believe that both must be true.

Holding The Tension of Both

When I returned to my fourth grade textbook and discovered the minimal information I had been given about slavery and its effects, I thought about the impact of unrecorded histories, of whitewashed origin stories. As I’ve written before, we give a truthful reckoning of the ugliness in our pasts not in order to bring shame, but in order to bring freedom. We acknowledge disease in order to bring healing.

Both 1619 and 1776 stand as foundational markers of who we are as a nation. Our ancestors captured, raped, and terrorized. Our ancestors dreamed, created, and loved. We as a nation are built upon good and evil, and the people who built this nation participated in good and evil. If we only remember the good, how will we prevent the evil from perpetuating itself among us?

I also wrote an additional post on the National Review’s take on 1619 Project which you can read here.