Defining Privilege Part One: What Privilege Is Not 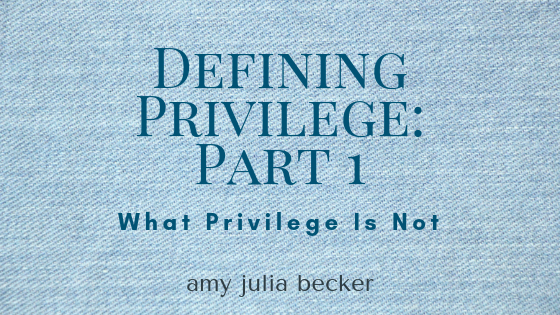 My book that explores privilege, White Picket Fences, was the all faculty read at the Indian Mountain School (a coed boarding school in Salisbury, Connecticut) this summer.

I spoke to the faculty and staff up at Indian Mountain School on Wednesday morning, and before we started a conversation about White Picket Fences, before we considered whether institutional change was possible and desirable, I wanted to be sure to define my terms. So we talked about what privilege is (see Part Two) and what privilege is not.

1. Privilege is not an accusation that you have done something wrong to be who you are:

I was speaking at an event in Raleigh, NC about these topics when a white man in the back of the room raised his hand. “There are days when I wish I could just put a paper bag over my head when I go out the door,” he said. His comment embodied the sense of both shame and paralysis that can come for people who do have unearned social advantages and become aware of the ways those things have worked to their benefit and to the detriment of other people.

But shame and paralysis do not change our condition. For people of privilege, instead of hiding or denying it, we are invited to acknowledge it and consider how to respond with humility, love, and hope. Is it possible to use our privilege not only to advance our own interests but to participate in healing in our own lives, communities, and world?

2. Privilege is not an accusation that you haven’t worked hard:

It’s well-documented that people of privilege value hard work and achievement. In the September Atlantic, Daniel Markovits wrote a piece called “Meritocracy’s Miserable Winners.” He details the intense hard work of the “meritocracy” (a term that designates a new type of aristocracy that values hard work but also passes along its advantages from one generation to another) from pre-school through grad school and into work life. He writes, “What, exactly, have the rich won? Even meritocracy’s beneficiaries now suffer on account of its demands. It ensnares the rich just as surely as it excludes the rest, as those who manage to claw their way to the top must work with crushing intensity, ruthlessly exploiting their expensive education in order to extract a return.”

Markovits overstates the situation, but many people who are born with unearned social advantages (aka privilege, more on that definition in my other post) work very hard to maintain their status. Privilege is not earned by hard work, but many privileged people work very hard.

3. Privilege is not an accusation that you have had an easy life:

One friend of mine put it this way: “It did not feel like a privilege to grow up in my family.” She grew up in a dysfunctional household with parents who fought and eventually divorced, with substance abuse and eating disorders and mental illness. She also grew up with whiteness and wealth and access to social networks and capital that made it easier to attend college and graduate school. The reality of social privilege did offer her advantages. But they did not mean she had lived an easy life. Feeling privileged and being privileged are different things.

In order to cut through the strong negative responses people often have to the concept of privilege, understanding what it is not and what it is will help us to also identify the way privilege functions in our own lives and the world around us, for good and for ill, and to take steps towards meaningful change and social healing.

Check out Defining Privilege Part Two: What Privilege Is.