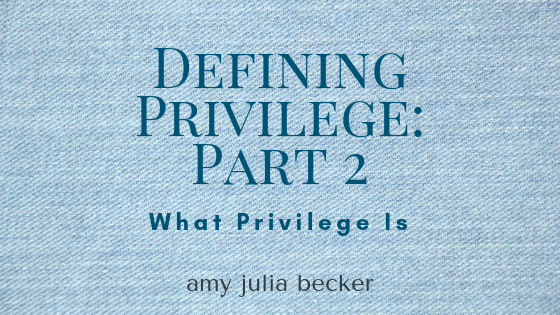 What exactly do we mean when we use the word “privilege”? The phrase “check your privilege” can sound–at least to some people–like an accusation. The word itself can become a barrier to conversation rather than a way to engage the challenging but important topics of racism, socio-economic class distinctions, gender inequity, and the different ways our social structure favors some groups of people over others.

The word privilege originally comes from Europe, where it was used as a legal designation. Certain groups of people had different legal rights than others. In this country, voting rights serve as a good example of a privilege that is extended to a certain group of people and not others. Originally, the privilege of voting went to landowning white men. Over time, that privilege expanded to include women, African Americans, and other people of color.

Although the word privilege still applies in this legal context, we also use the word in a social context. Privilege in this sense means unearned social advantages. I, for instance, as a white woman who was born to married, affluent, educated parents, was born into privilege. I had opportunities to learn and grow that were not afforded to some of my peers. When I use the word privilege, I am referring to this set of unearned social advantages.

We often hear the word “white privilege,” and countless studies demonstrate the ways in which being perceived as “white” in America offers social advantages. To cite a few examples, people see white athletes as more intelligent than black athletes, even when offered the same verbal description of their intelligence. Employers are more likely to invite people with “white-sounding” names to interview for jobs. The history of housing in America is a history of exclusion based upon racial classification that has privileged white people above others.

And yet whiteness is only one aspect of privilege. Social privilege is a Venn diagram with overlapping pieces and parts that can include race, gender, sexuality, religion, immigration status, and so forth. My friend Niro, for instance, considers herself a person of privilege. She has married parents who are both doctors. She is also a first-generation Sri Lankan American who has experienced discrimination for her appearance as a woman with brown skin. Our daughter Penny experiences the privilege of whiteness and wealth. She was also born into a history of discrimination and exclusion as a person with an intellectual disability.

“Privilege” can easily be oversimplified.

And then there is a second definition of privilege, which is the feeling of unearned and undeserved favor. As I write in White Picket Fences, rather than trying to deny or escape privilege, one gift of my journey as a person of privilege has been to understand privilege differently:

“It makes sense to talk about privilege in terms of access to private clubs and schools and bank loans and preferential treatment by authorities. It makes sense to expose the injustices of privilege and call for them to be rectified. But there is also the privilege of cleaning the wounds of people you love, of participating in healing and new life, of becoming vulnerable and needy and receiving love and care. There is another type of privilege, privilege that connects instead of divides, that shimmers through the air like a line of light, available if only we stop counting the coins and look up.”

The more we understand, acknowledge, and respond to the first kind of privilege, the more we will be able to receive the second kind, the privilege of being human beings created to love and be loved.

To read my post on what privilege is not, go here.

PrevPreviousDefining Privilege Part One: What Privilege Is Not
NextUnderstanding The US Immigration Crisis: 14 Recommended ResourcesNext