What if Usefulness is Not the Measure of our Humanity?

I was invited to share some thoughts on disability and theology with the student body of St. Paul’s School, a boarding school in Concord, New Hampshire. I offered three reflections on the theme of love and knowledge, along with three readings. I have modified them slightly for this blogging format, but I wanted to share the thoughts with you. Here’s the second post (and here are links to the first and third):

One of the ways we combine love and knowledge is by putting facts in the context of experience. I’ve included photos of Penny and our family here to demonstrate what the abstract factual knowledge about Down syndrome looks like in the context of love.

Paul says in 1 Corinthians 1 that God has chosen the weak, the foolish and the crazy to shame the clever and the powerful; he has chosen the most despised, the people right at the bottom of society. Through this teaching we see a vision unfold in which a pyramid of hierarchy is changed into a body, beginning at the bottom. One might ask if that means Jesus loves the weak more than the strong. No; that is not it. The mystery of people with disabilities is that they long for authentic and loving relationships more than power. They are not obsessed with being well-situated in a group that offers acclaim and promotion. They are crying for what mattes most: love. And God hears their cry because in some way they respond to the cry of God, which is to give love.
–Jean Vanier, Living Gently in a Violent World 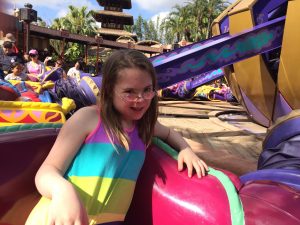 A few months ago, I was listening to the poet Michael Longley in an interview on NPR with Krista Tippett. At one point he said, “Poetry is useless,” and he wasn’t kidding. He went on to say, “Poetry is useless, but it has great value.” I thought about what poetry has to offer—beauty, peace, insight into the human condition, questions about meaning and purpose, a connection to something transcendent and bigger than ourselves. And then my mind moved from poetry to people.

Our culture is constructed around an idea that people need to be useful in order to be considered valuable. They need to be able to solve problems. They need to work in a productive—which is to say, economically viable—way. They need to not impose a financial, emotional, or legal burden on others. Our culture prizes usefulness.

We see this exaltation of usefulness in the way we reward hard work that achieves good grades, athletic accomplishments, and high-salaried jobs. So we approach learning not so much as an opportunity to explore notions of truth and beauty and justice but rather as an economic problem in which we go to the best schools so we can get the best job so we can make the most money so we can be independent, so that we will not need other people.

In our culture, we don’t only see the exaltation of usefulness. We also see the disdain of uselessness. Instead of honoring the wisdom of elderly people, we see them as burdens who take away resources from the rest of the population. Instead of wondering what people with intellectual disabilities have to offer, we for many years shuttled them to institutions, and we now offer women the option of terminating any pregnancy in which the fetus has Down syndrome or other genetic conditions. We fear or shun people with mental illness instead of believing they might be able to offer insights into our common human condition.

I have often succumbed to this line of thinking, assuming that my value as a human being comes from my usefulness, from my good grades and my awards and high job performance reviews. But after Penny was born, two things happened.

Nouwen, whose entire life had been built upon his usefulness as an intellectual, began to recognize how much he needed to know that he was loved not because he was useful, but because he was valuable. Imagine meeting someone who doesn’t care about your grades or what college you’re going to or what exclusive internship you got for the summer. Imagine that person seeing beneath all the layers of achievement, and loving you. That’s what happened when Henri Nouwen spent years with Adam, a young man who had no regard for Nouwen’s academic credentials, a young man who needed Nouwen’s help for basic tasks like bathing and eating, a young man who was able to communicate love and care for Nouwen in a way none of his fellow intellectuals had ever been able to do.

At the same time that I was reading these books and meeting adults with Down syndrome, I also was becoming Penny’s mother. My knowledge about what she might or might not be able to do, what diseases and vulnerabilities might slow her down, what likelihood she had of being useful in the world, my knowledge became intertwined with my love for her, my delight in her, my gratitude for her. 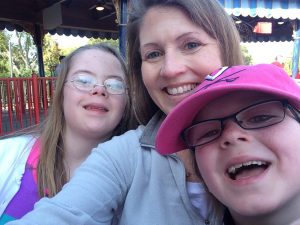 I wrote an essay for the New York Times when I was pregnant with our third child about how I had decided not to pursue prenatal testing because I would welcome another child with Down syndrome. Although many people expressed support of my perspective, others commented on how it was unethical of me to even consider bringing another child with Down syndrome into the world because of the burden that child would place upon his or her family and society. The logic went something like this: If they can’t provide for themselves, then they shouldn’t exist. If they are too vulnerable, too needy, then they are useless, and we have no place for them.

But what if usefulness is not the measure of our humanity? And what if one of the most important things Penny and other people with intellectual disabilities have to offer is the affirmation that our value as human beings arises from our belovedness, not our usefulness? What if to be human means to be loved, and what if this is the most important truth for any of us to ever learn?