AJB Recommends: Books and Podcasts on the Legacy of Slavery 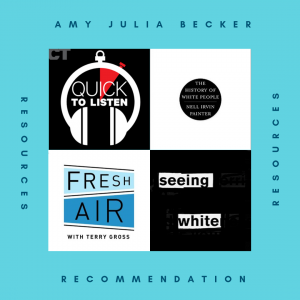 I’ve focused on the content of the 1619 Project this week, and I want to recommend a few additional podcasts, articles, and books for anyone who wants to explore more about the way slavery and racism have affected American history:

Articles on the Legacy of Slavery & the 1619 Project

One reader of my post about the 1619 Project drew my attention to this excellent critique by Andrew Sullivan in New York Magazine. The short version is that Sullivan considers the ideology behind the project and not just the facts the project draws our attention to. As I was reading, I copied sentence after sentence to share with you here so I could convince you to go read the article in full. Sullivan experienced the same discord that I expressed earlier this week–is 1619 our “true founding”? Or is that an overly simplistic rendering of history? The repercussions of slavery in our nation deserve the attention given by the New York Times, but Sullivan’s analysis of why their framing of the issue is problematic was very helpful for me. Here’s a taste:

Take a simple claim: no aspect of our society is unaffected by the legacy of slavery. Sure. Absolutely. Of course. But, when you consider this statement a little more, you realize this is either banal or meaningless. The complexity of history in a country of such size and diversity means that everything we do now has roots in many, many things that came before us. You could say the same thing about the English common law, for example, or the use of the English language: no aspect of American life is untouched by it. You could say that about the Enlightenment. Or the climate. You could say that America’s unique existence as a frontier country bordered by lawlessness is felt even today in every mass shooting. You could cite the death of countless millions of Native Americans — by violence and disease — as something that defines all of us in America today. And in a way it does.

Podcasts on Slavery’s Legacy in America

Mark Galli and Morgan Lee interviewed Michael Haykin about the church’s theology and history around slavery going all the way back to the Roman Empire for Christianity Today’s Quick to Listen podcast.  I learned so much from them about the distinctions (and similarities) between Catholics and Protestants when it came to the slave trade and the New World, the economic interests that overrode theological objections when it came to enslaving human beings, and the radical Christians who objected to slavery. (Spoiler alert, but I have to share that this podcast even includes a story of a Quaker who had the gift of nudity. You’ll have to listen to know what I’m talking about!)

I also listened to historian Eric Foner on Fresh Air, talking about his new book The Second Founding. In this conversation about what the “true founding” of America is, I thought his perspective was fascinating. He calls Reconstruction the second founding of America because of the ways the 13th, 14th, and 15th Amendments restructured our society.

I’ve mentioned this podcast before, but John Biewan’s Seeing White series for the Scene on Radio podcast is an incredibly compelling exploration of what it means to be white in America, how this concept of whiteness was created, and what it has meant over time. Most episodes are in conversation with Chenjerai Kumanyika, who is an African American and a Professor of Media Studies. Most episodes focus on whiteness in relation to the history of African Americans, but the series also devotes episodes to the place of Native Americans in this history and immigrants from other countries within the past century.

And finally, here are a few books in the “up next” category for me. In other words, I haven’t read/finished them yet, but they’ve been recommended by so many people that I am eager to dive in:

With Justice for All by John Perkins. I have started this one, and Perkins explains his own story of personal transformation when he became a Christian and then devoted his life to pursuing fellowship with white Christians (Perkins is black) and pursuing justice for all people.

The History of White People by Nell Irving Painter. Painter is interviewed in the Seeing White podcast I mentioned above, and I had the privilege of having her as a teacher when I was an undergraduate for a History of the American South class. She’s smart, engaging, gracious, and informative as a teacher and on the podcast, so I expect to encounter that same blend of scholarship and accessibility in her book.

Then there are the “I can’t believe I still haven’t read this” pile of books: The Color of Law by Richard Rothstein, Raising White Kids by Jennifer Harvey, and How to Be an Anti-Racist by Ibrahim Kende.

Undergirding all the questions and all the areas of ignorance is my conviction that we have the freedom to explore painful histories and the freedom to celebrate diverse identities because of our common humanity. I look forward to learning more.