Why I Disagree with The National Review about the 1619 Project 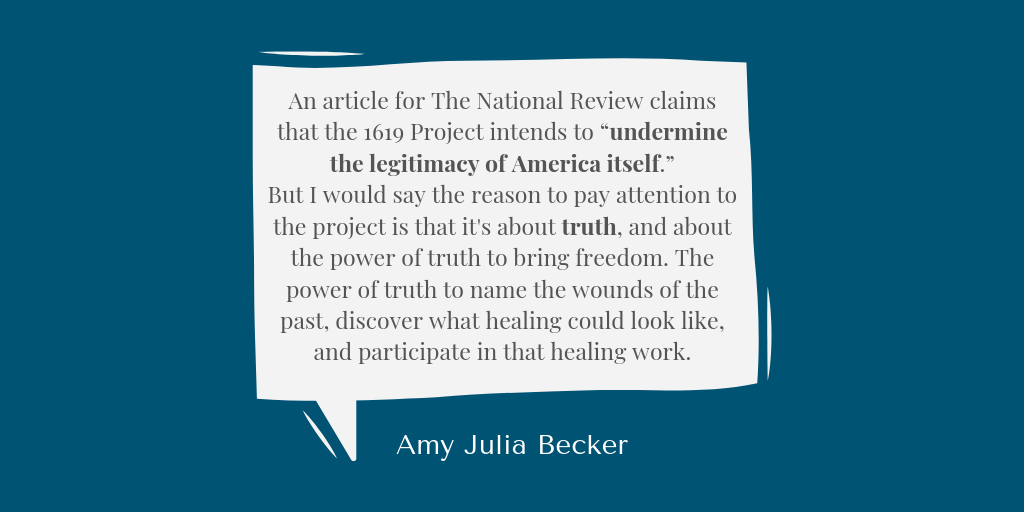 I wrote recently about the 1619 Project by the New York Times. The name of the project comes from the year that the first African captives were sold as slaves in Virginia. As I described in that post, the project seeks to reframe the history of the United States to incorporate this event and articulate the legacy of that moment in our current day. It’s a difficult subject and one that has sparked debate and discussion, but it shows how deeply important the power of truth is in our country. Below are some of my thoughts on one op-ed written in response to this project.

In an article for The National Review, Rich Lowry claims that the 1619 Project intends to “undermine the legitimacy of America itself.” But I would say the reason to pay attention to the 1619 Project is not about undermining the legitimacy of our nation. It is about truth, and about the power of truth to bring freedom. The power of truth to name the wounds of the past, discover what healing could look like, and participate in that healing work.

On the one hand, Lowry offers a helpful perspective on the history of human beings enslaving one another across continents and cultures and throughout time. And yet he does so as an antagonist to what “they” (aka the “liberals”) don’t tell “you.”  I assume everything Lowry reports about global and historical slavery is accurate, but it’s an absurd premise. He implies that because other countries across time and space have enslaved people Americans shouldn’t have to reckon with the horrors and injustices in this nation.

Lowry’s article brings up with pride the fact that our country–unlike many other nations–was founded upon principles of human rights and democracy. It is a terrible irony that a country ostensibly founded upon freedom was also founded upon slavery. And it is precisely that irony that the 1619 Project invites us to consider.

Lowry suggests that because human beings have enslaved one another across time and cultures, Americans shouldn’t have to reckon with our own participation in enslaving people. I thought of parents who say to kids, “Just because your friend did it doesn’t make it right.” Lining up a historical record of slavery demonstrates the human inclination to self-centered evil that spans continents. But this historical and global context offers no excuse–the founders knew that slavery contradicted the very principles they were advocating (as Nikole Hannah-Jones’ article for The 1619 Project mentions, Thomas Jefferson, himself a slaveholder, called slavery a crime in the first draft of the Declaration of Independence!).