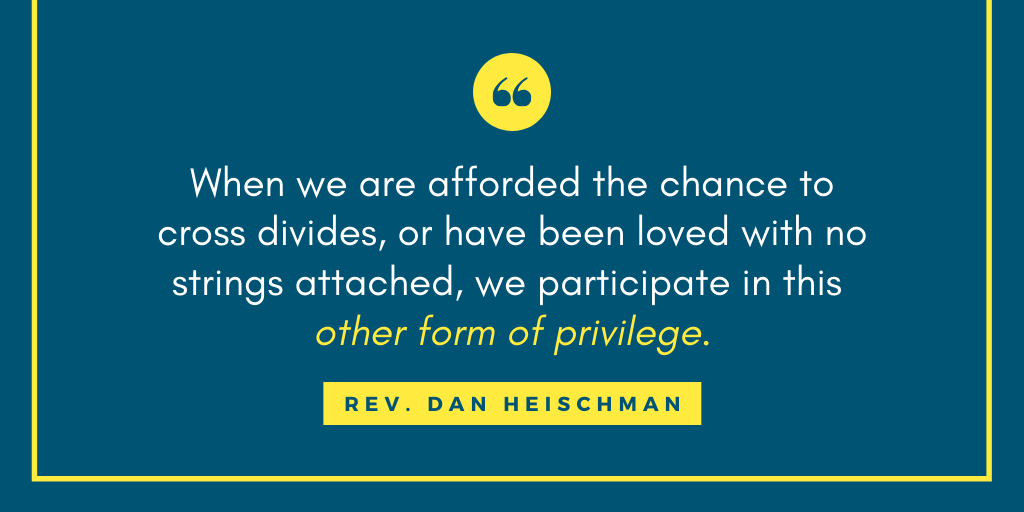 A friend mentioned years ago that memoirs go through three stages. First, we live them. Then we write them. And then, once they are out in the world, we receive them again from the people who read them.

One of the most rewarding and wonderful aspects of writing White Picket Fences has been seeing what different people have found within its pages and how the words and stories contained there have been able to spark conversation, prayer, and action within local communities. Over the next couple of months, I’m going to share some of the ways WPF has served as a tool to spark thinking, connecting, and taking action within local communities.

By the “dark side of privilege” I assume this board member was referring to the attitudes, practices, and assumptions that people of privilege can exhibit that tend to exclude rather than include, favoring one group of people over the other. It may be the subtle or not so subtle presumptions of entitlement that leave us feeling as if we occupy a highly deserving position. Privilege also surfaces in the conscious or unconscious comments and insinuations people can make, which reflect their seemingly “elevated” status and leave other people out of the circle.

Some say that Episcopal schools exhibit more than their share of these dark sides of privilege. Certainly, many in The Episcopal Church are ambivalent about our schools because of their belief that they are bastions of elitism and exclusion, thus running contrary to our convictions and practices as Christians. We may not experience our schools as such places, but the external perception may very well be there.

How then, we might ask, do we as Episcopal schools escape the perils of privilege?

In her recent book, White Picket Fences, Amy Julia Becker recounts how she, as a person of privilege, has struggled with the ways privilege has blinded her, but also blessed her. Her book is an exploration of what she refers to as “the benefits and wounds that come with privilege.” While it has afforded her access to an excellent education and rare opportunities, it has also, in her view, served as a fence, cutting her off from others, keeping others out, and eclipsing human bonds.

She goes on to describe two types of privilege. First, the privilege of being given a special status by virtue of race, education, or wealth. The second is entirely different: the grace-filled opportunities of being singled out for something purposeful, of “being the undeserving recipient of the gift of human connection.” For Becker—a Christian—it is a spiritual blessing, having nothing to do with wealth, education, or ethnicity. When we are afforded the chance to cross divides, or have been loved with no strings attached, we participate in this other form of privilege.

This type of privilege, she writes, “connects instead of divides, shimmers through the air like a line of light, available only if we stop counting the coins and look up.” It issues in gratitude, not presumption.

In ways very few other schools can do, Episcopal schools celebrate this second type of privilege. We can point to the blessings of human connection, of giving and receiving love, of being the recipients of God’s grace.

How do we escape the dark side of privilege? By holding up the second, enduring kind of privilege.

I’m thankful for what Rev. Heischman had to say and for the opportunities I’ve had to speak in several Episcopal Schools and churches this past year including National Cathedral School, Good Sam in Paoli, PA and several others. I hope White Picket Fences continues to spark thought, spiritual and personal connections, and loving action in the world.