Trust Your Love Instead Of Your Fear 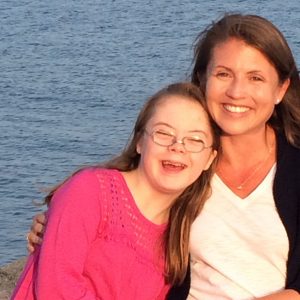 A few days after the Presidential election of 2016, I wrote this post. Looking back on it now, it seems like a great introduction to my writing and thinking, so I have edited it to be a little less bound to the events of the election. If you enjoy what you read here, please keep exploring my books and other blog posts.

“Trust your love instead of your fear.”

I’ve also taken those words as an invitation to look for love all around us—the love exhibited by friends and family members, teachers and doctors, by Penny herself, by the “consequential strangers” in our life— the crossing guard, the man who works at the post office, the cashier at the grocery store who knows her by name.

What if we—as individuals, as communities, as a nation— trusted our love instead of our fear? What if we articulated the things about this nation that are worth loving—the ideals of justice, and freedom, and the pursuit of happiness? What if we believed that love could bridge the gaps between ethnic and racial and religious groups? What if we chose to love one person who represents “the other” to us, walked in his or her shoes, listened to his fears, received her anger and hurt?

But what if, instead, we decided to trust our capacity to love? What if everyone who voted for Clinton decided to love a Trump supporter and vice versa? What if love triumphed instead of fear?

I can only speak to my own little life, with a baby girl who was diagnosed at birth with a genetic condition destined to bring challenges. People told me to fear the doctors and the school system and the caregivers and the Sunday School teachers and the culture that would mock her and dismiss her and treat her as an outcast.

But when she was five months old and needed ear tubes, the doctor gently took my baby girl in the crook of her arm and carried her back to the operating room so I wouldn’t need to watch her be rolled away on a stretcher. When she was two and having unexplained fevers, the church prayed for her and for us with gentle persistence until she was well. When she was five, she found her first best friend and they walked to school hand in hand. When she was six, her school changed their structure and added a special education teacher so that she could fully belong in the classroom with her typical peers. At each step along the way, I have been called to trust my love for her, trust the love of our community, instead of my fear.

As I began to consider these thoughts, I wondered if they came only out of a place of power and privilege and protection, the luxury of a white, overeducated, economically secure woman. But then I thought about the people who have modeled love instead of fear—Jesus, Martin Luther King, President Obama, the men and women in Charleston who offered words of forgiveness to Dylann Roof, my friend Patricia Raybon who dared to hope even after her candidate lost the 2016 election, the Orthodox Jewish man in Florida who befriended a white nationalist, the heroes like Malala Yousafzai who refused to live in fear of the Taliban. It is not only my daughter who has taught me to trust in love, but these men and women throughout history and across the globe who have modeled a different way that the way of fear and hatred, who have modeled a way of forgiveness and hope and healing.

Fear causes us to duck our heads and hide, to set our boundaries, to categorize human beings by their race, class, ethnicity, religion, or interest group. But love grows us up, and it binds us together.

Love costs us. We make ourselves vulnerable to hurt when we love. We give time and money and resources. We risk broken hearts. But love also grows us up. It cannot be contained. It cannot be defeated. Even when the people embodying love are killed, their love spurs others on. Love is the power that fuels the universe, and we are invited to participate in that power, to be animated and anchored and transformed by that power.

I am grieved by the divisions within our nation. But I am hopeful for our future. And I am choosing to trust my love instead of my fear.

An earlier version of this post appeared on my blog after the Presidential election of 2016.

PrevPreviousWhy I Won’t Tell You What Happened When Penny, Our Daughter with Down Syndrome, Went to the Middle School Dance
NextWhat Our Summer Vacation Taught MeNext