Why I Won’t Tell You What Happened When Penny, Our Daughter with Down Syndrome, Went to the Middle School Dance 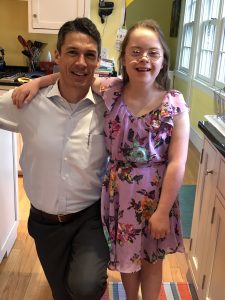 For a while, I was writing less about Penny because everything just felt really normal. It was hard to come up with anything interesting to say about a girl who sometimes struggled with math concepts and sometimes didn’t want to participate in gym class and sometimes fought with her siblings but mostly just did typical things like listen to Taylor Swift and read Judy Blume books and go to ballet class.

And then came middle school. Honestly, for Penny it has continued to feel pretty typical. She’s had a few tiffs with friends. She’s worried once or twice (though not nearly as often as her mom and dad) about being left out. She’s learned a ton and grown up more than we could ever dream. There is plenty of interesting material I could write about, from the reminders of my own super-awkward middle school days to the parenting issues that come up when deciding whether a hard situation has to do with middle school in general or Down syndrome in particular.

In the past week, she ran in her first track meet and braved her first middle school dance (thus the photo) and signed up for sleepaway camp. I have thought and prayed and had hours of conversations with friends about all three of those events, but I’m not going to write more here about them.

Penny now has her own story to tell. She’s as cute as ever, and more complicated and nuanced and beautiful than ever too.

So if you ever feel like you only read/see/hear about little kids with Down syndrome, don’t assume it’s because we parents of older kids have nothing good to say. It’s just because our kids are like all the other kids out there–growing and changing and awkwardly and beautifully becoming themselves.