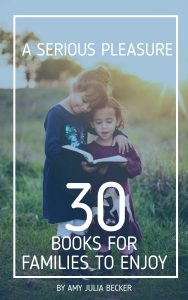 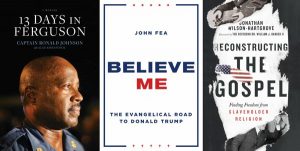 “Religions can be the cause of oppression and injustice, but they also will be part of the solution.”

So writes Publisher’s Weekly in a long and detailed list of current and forthcoming titles from religious publishers who have lined up titles that address racism, privilege, and sexism. I was encouraged to see White Picket Fences mentioned among these other noteworthy books.

One of the things I write about in WPF is how I used to think I needed to choose between critiquing the past and feeling grateful for the past. Now I believe I can do both, and it sounds like many of these writers are similarly trying to reckon with the beauty and hurt of the past in order to participate in healing for the present. 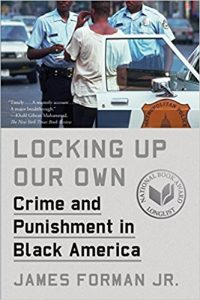 I have known white people who do drugs for most of my life. Not, generally, “hard drugs,” and not, generally, for long stretches of time. But when I was in high school and college, lots of people I knew smoked pot. And it isn’t unusual now, knowing lots of high school kids still, to hear about kids who have been caught with illegal substances in their systems.

I have never known a white kid who went to jail or prison.

I thought about those kids recently when I read Locking Up Our Own by James Forman Jr. I recommend it to anyone who wants to try to understand how we ended up in a nation with such a high prison population and an ongoing escalation in drug activity and all the subsequent consequences for individuals and communities. Forman traces the racist history of American policing and imprisonment, but he also talks about the role the African American community played in calling for stricter laws related to both gun possession and drug sale and use.

Forman’s book doesn’t let white Americans off the hook when it comes to the injustices we still see, but he fills out the picture and calls upon all of us–white and black–to call for different systems that won’t result in so many young black men (in particular) behind bars. He doesn’t use the words restorative justice, but especially for juvenile offenders, that is one solution he hints at.

Back to those white kids I know who make bad decisions about smoking pot and doing other drugs. When they get caught, it rarely involves the police. It often involves serious consequences, like suspension from school, notifying colleges of their wrongdoing, and probation. The hope is that these consequences give the kid a sense of the serious nature of what s/he has done as well as a chance to make different choices in the future.
Don’t most kids–black or white, rich or poor–deserve the chance to make mistakes and learn from them? 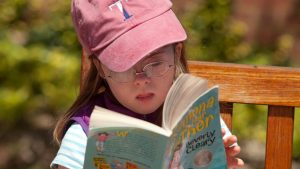 “Don’t think you need to become a bookworm in order to enjoy these books or this time with your kids. Just read, a little bit, and see where it takes you.”

These words come from my new (free!) ebook A Serious Pleasure: 30 Books for Families to Enjoy. Click here to sign up for a copy (and please let other people know about this free resource if you think they’d enjoy it).

I’ve had parents say before that the reason they don’t read with their kids is that finding 30 minutes before bed seems impossible. I agree! But finding 10 minutes seems like something that could happen, and 10 minutes every day really adds up. Some nights that’s all we have. Some nights we don’t even do that. And some nights we’re so entranced by whatever story we are reading that we plow through bedtime to find out what happens.

But the time, no matter how small or large, gives us a way to share a story. It gives us something in common, that cuts across the generations and whatever arguments we were having earlier in the day. It gives us a moment of peace and rest and delight.

“Daughter, your faith has healed you. Go in peace and be freed from your suffering.”
–Jesus’ words as recorded in the Gospel of Mark 5:34.

This woman has been bleeding–which is to say, she has been a social outcast, a religious outcast, and in physical pain–for twelve years. She has also spent all her money on doctors who didn’t make her better. She could easily be hopeless, or bitter, or angry. She could easily have lost faith in a God who loves and cares for her.

But then Jesus comes to town, and she hears that he heals people. So she risks mockery and more heartache by sneaking into his presence, attempting to lose herself in the crowd around him, and reaching out to touch his cloak. Immediately, she knew she was healed.

The story could end there. She knows Jesus is the real deal–powerful in word and deed, a conduit of God’s unending care and might, a healer. It seems that the woman tries to sneak away, relieved that she wasn’t caught in the act of stealing Jesus’ healing.

But Jesus doesn’t let her go. He insists that whoever touched him proclaim herself. She’s afraid. What if she was wrong about him, and he wants to shame her? What if he will be angry that she–a poor, bleeding (which is to say, unclean) woman–dared to touch him? What if he condemns her for her actions?

Still, she has the courage to expose herself to Jesus, and from there come his words: “Daughter, your faith has healed you. Go in peace and be freed from your suffering.”

This might sound like a lovely Hallmark-style sentimental word, but it would be more accurate to call it a shocking statement.

First, Jesus calls her daughter. He names her as related to him (and to God, whom Jesus routinely calls Father) in a tender and intimate way. The story surrounding this one is of Jairus, a religious leader in that town, who is begging Jesus to come heal his daughter. When Jesus calls this outcast woman “daughter,” it comes as a direct comparison to Jairus. Just as Jairus was willing to humiliate himself by asking Jesus to come, just as Jairus would do anything for his beloved child, so too Jesus loves this woman.

Second, it would be really easy to think that Jesus’ power healed the woman. And on some level that’s true. Without Jesus’ healing power, she couldn’t have been healed. But that’s not what Jesus says. He says, “your faith has healed you.” He gives her credit. He affirms her. He empowers her.

“Daughter, your faith has healed you. Go in peace and be freed from your suffering.”

PrevPreviousA Serious Pleasure: Free Ebook with 30 Book Recommendations to Read with Your Children
NextThe Kind of Love I Want to ProclaimNext