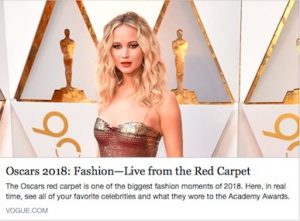 I didn’t watch much of the Oscars last night, but I will confess to always at least scrolling through the pictures of men and women on the red carpet. I’m more interested in the women’s outfits, truth be told. They seem to fall into two categories: the ones who make a statement either with surprisingly plunging necklines or the ones who make a statement with their choice of color or style. Then there are the ones who aren’t surprising, who wear more classic examples of elegance and style. (Here’s Vogue’s set of images from this year if you want to page through.)

I’m not planning to give my own opinions on these dresses. Looking at these women, I first starting thinking about the ways clothing has been used to make public statements of late (from Michelle Obama’s black dress during the Inauguration to the now infamous pussy hats to the black dresses at the Grammy awards).

But then I started thinking about the statements our clothing makes even when we aren’t trying to enter into politics or the public eye. In these situations, clothing can be an expression of individuality. It can also be a way to blend into the crowd. But I care most about clothing as an act of hospitality, a way to welcome others and connect with others and encourage others.

It’s so easy to think only of myself when I’m getting dressed in the morning–what will feel comfortable or look good or just be easy. Those are fine things to be thinking about. But I can also think about the people I will be seeing all day–about respecting and welcoming them with who I am and how I express that reality. Even the most seemingly superficial aspects of who we are can have deep meaning that connects or divides us from those around us. 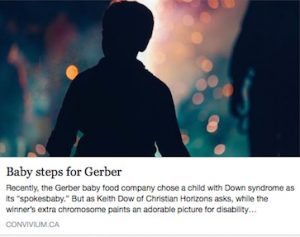 I’m grateful for Keith Dow’s thoughts on the Gerber baby of the year who has Down syndrome, and his thoughtful use of quotations from A Good and Perfect Gift and my own thoughts here on Facebook.

Decades ago, people with intellectual disabilities went to institutions on a regular basis. Life expectancy was short and quality of life was low. In the 1970s, more and more parents refused to allow their children to go to these institutions. Over time, they advocated for their kids to be included in public schools (It is AMAZING how many people, to this day, ask me whether Penny goes to school). Laws changed. Quality of life improved. Life expectancy for people with Down syndrome has more than doubled over the course of my lifetime.

Michael Berube has written a beautiful memoir about his son Jamie, Life as Jamie Knows It, in which he describes his adult son with Down syndrome. Jamie is an interesting, dependable, hardworking young man who loves people and can tell you all sorts of things about art and music. Jamie is unemployed and struggling with depression. Jamie’s story is emblematic of the situation for thousands of others like him.

But there are signs of hope. This 2-minute video tells the story of an ice cream shop in Texas that employs people with intellectual disabilities throughout the store, including in management positions. It highlights some of the advantages of such employment: not one worker has left the company since it began, and these hardworking young people are faithful to the job entrusted to them. They work hard, with good attitudes, and they always show up for their jobs.

Penny is twelve now, and my hope and prayer is that over the course of her lifetime we will see more and more employers recognize that it is good for business to employ people with intellectual disabilities.

I posted questions here a while back to find out what you all envisioned for the cover of White Picket Fences. I got all sorts of responses, many of which aligned with my own thoughts on what the cover should look like. Most involved physical white picket fences. Some people imagined pristine houses with manicured lawns. Others saw a gritty scene of dilapidated homes behind a fence. I personally envisioned a white picket fence with an open gate.

And none of these are where the cover landed.

If you spend some time looking at covers, you’ll notice that most covers with a concrete title offer an abstract image, and vice versa. The advantage of pairing abstract and concrete is that the title and the cover enhance each other rather than echoing each other. When I read “white picket fences” I already have an image in mind. The cover shouldn’t take away that image or contradict it. It should deepen it or expand it or complicate it in some way. A cover that echoes a title can be limiting.

After lots of back and forth, I’m sharing here the final cover design of White Picket Fences: Turning toward Love in a World Divided by Privilege. The book comes out in October, but it is available for pre-order now. I’d love to hear what you think, and I hope you’ll consider purchasing a copy to enter into a conversation about race, class, disability, identity, and how love can move us toward an understanding of our common humanity in the midst of our messy and beautiful differences.

Click here to pre-order and to find out more. 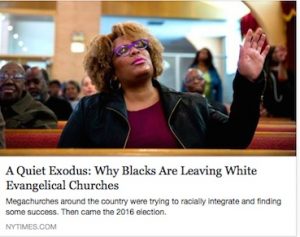 Last week I heard a podcast interview with Dr. Maurice Wallace, a UVA professor in the department of English and African American Studies. (Here’s the interview, and I recommend the entire series) Dr. Wallace cited a study showing that when you ask groups of people about their theological beliefs, there is one group that most of all identifies with the theology of evangelicalism. Not the social or political assumptions of evangelicalism, mind you, but the theological assertions such as the authority of the Bible, the need for a personal relationship with God, the reality of sin, the atoning death of Jesus.

There’s been a lot of press coverage of white evangelicals. But Dr. Wallace pointed out that it is African Americans who, percentage-wise, are most likely to identify with evangelical beliefs.

Which makes it all the more disheartening (though entirely understandable) that African Americans are leaving evangelical churches.

And which makes it all the more important for white evangelicals to listen to their African American (and Latino and other people of color) counterparts. Listening doesn’t just mean letting other people speak their mind. It means understanding, being able to reflect back what it is that the other person has said. If white evangelicals could understand that opposing views of politics can emerge from the same theological beliefs, it wouldn’t change everyone’s political positions. But it could change some of those positions. It could build trust. It could offer a way for the church to shine a light into the culture of division instead of becoming a mirror image of that culture.

PrevPreviousA New Frontier for People with Disabilities
NextThoughts from March 12-16, 2018Next