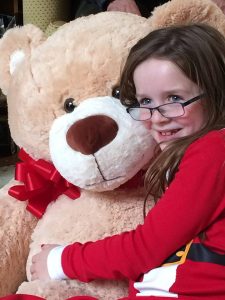 I can’t remember why we were talking about the Garden of Eden last night at dinner, but in the midst of the conversation Marilee said, “Can we go visit it?”

Peter said, “No. It isn’t on a map. We aren’t sure where it was.”
Ever the English major, I chimed in with, “We aren’t even totally sure from the Bible if it was a place that they knew the location of or if it was a story that describes how all of us humans end up turning away from God.”
“I wouldn’t have listened to that snake!” Marilee said.

“We all listen to the snake,” Peter said.

Marilee frowned. Then her eyes got wide and bright. “I know! Let’s Google it!”
We assured her this plan–for all the wonders of the Internet–still wouldn’t take her to Eden.

She paused again, thinking. “I know,” she finally said. “The way to find the Garden of Eden is to follow God’s love.”

I had the privilege of talking with a mother who has received a prenatal diagnosis of Down syndrome with her third child today. I told her about Penny, and how I used to be afraid and now I have great hope, and I told her that my grief has turned to joy, and I told her of the gift that Penny is in my life and in our family.

At one point, she said, “Yes, everyone says that kids with Down syndrome are a gift and that they teach you to be patient and compassionate.”

And then I remembered what William said to Penny on her birthday. “I really admire the way you don’t get stressed out about time,” he said. And it’s true. Penny likes to be on time, but she doesn’t worry about time. She likes to accomplish things, but she doesn’t insist that she accomplish them immediately. She is willing to practice for years. She doesn’t hold grudges.

I said to this woman on the phone, “It’s not just that by having Penny in my life I have needed to learn how to be more patient or more kind, though that may be true. It’s not just that she has taught me things because there are challenges in having a condition like Down syndrome. When I say she has taught me things I mean that she is actually a role model to me in many ways.”
She doesn’t teach me simply by what she requires me to give her. She teaches me by what she gives me. She teaches me by who she is, not just by who she calls me to be.

I’ve listened to Father Greg Boyle speak a few different times, but I only recently read his books, Tattoos on the Heart and Barking to the Choir. Boyle is the founder of Homeboy Industries. He lives in Los Angeles in a neighborhood with lots of gang activity. Boyle himself is an older white man. He compares himself to Santa Claus in appearance. Most of the “homies” (their term) he works with are Latino or African American men and women with multiple tattoos designating their gang affiliation. In other words, at least as far as appearance goes, “G” (as he is affectionately known) looks very different from the homies.

Still, I was surprised as I was reading at how much these books resonated with me. My life could not be farther from this neighborhood in Los Angeles as far as education, socio-economic status, or race and ethnicity. But I found myself nodding my head again and again. On the one hand, Boyle is a great storyteller, and he deserves some credit for drawing me in. But I was also drawn to these stories because of the truth they contain, the truth not just about former gang members on the streets of LA, but the truth they contain about me and about every other human being, the truth that we are all longing to be accepted, to have purpose and friendship, to be known and received and loved.

In Barking to the Choir, Boyle tells the story of Andres, a boy “abandoned by his mother when he was nine years old…” Andres tells G a story: “I see an old man lying on a bench. There’s a half-full forty on the ground in front of him and the old guy, well, he’s shiverin’ cuz it’s cold. So you know my favorite sweater? Well I was wearin’ it and I took it off and I laid it over this guy. He didn’t wake or notice.” Boyle writes, “For a moment, Andres enters a sort of trance. And then suddenly he’s shaken from it. “Hey. I’m not tellin’ ya all this so you think I’m AAALLL that. Nah, I’m telling ya all this cuz I know that bench. I been on that bench.”

When we start to see ourselves not only as the people who are willing to give our favorite sweater to the guy on the bench, but as the people who have been on the bench and give the sweater not out of pride but out of humility, not out of superiority but out of solidarity, then we start to tap into the love that fuels the universe, the love that created us all. 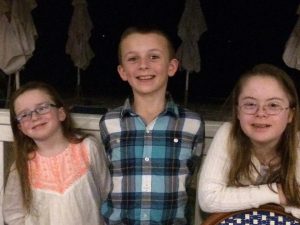 I’ve wrestled with these questions for years now–how do I protect my kids in an appropriate way and yet also introduce them to the truth that the world we live in is marked by both brokenness and beauty?

I wrote about it for Christianity Today, using the Little House on the Prairie books as a launchpad. I would love to hear how you handle telling the truth to kids or how your parents handled it with you.

I posted this trailer for the film our family will be in which examines the idea of being “normal” through the lens of Down syndrome. Here it is again for those of you who didn’t get to enjoy it the first time. You can learn more at www.normiefilm.com