Once a week I compile the short reflections I’ve offered on my Facebook Author Page into one blogpost. If you benefit from these thoughts, please pass them along to your friends:

Here’s another video post about Luke 15 (link included below in the comments). This passage is perhaps Jesus’ most famous story–about the son who was lost and who returns home. As familiar as it may seem, I was talking with some students about it this week and I was struck again by the surprises in this story. I’d love to hear what you think! 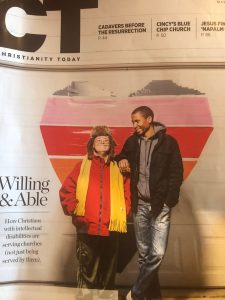 I went to the post office with all three kids yesterday. Penny asked if she could open the mailbox. Marilee took the mail out. William claimed the responsibility of sorting it. Amidst the bills and catalogues we also found this month’s issue of Christianity Today, with the story I had the privilege of writing, “Willing and Able,” on the cover.

After the post office, we went to the library. I asked Penny to come over, and we sat together. I had her read the three parts (beginning, middle, and end) of the article that were about her. Penny read the conclusion out loud: “Yes, Penny has taught me patience and kindness. But she has given me so much more than a positive life lesson. In her perseverance, in her love for others, in her readiness to forgive–Penny is a role model to me… Penny teaches me by who she is, not just by who she calls me to be…” And as she read, she reached over and squeezed my hand.

She finished and said, “Where’s the part about William and Marilee?”

I said, “They don’t get to be in this one because they don’t have an intellectual disability.” 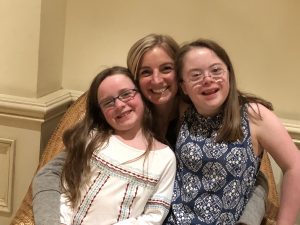 The word “buddy” comes up a lot in programs for people with disabilities.

When Penny was a toddler, our church said they’d like to get a “buddy” in the classroom with her (by which they meant an adult to help her navigate the room or kids if she needed extra help).

There are “Buddy Walks” to raise money for causes related to Down syndrome. We’ve participated and supported many of those over the years.

There’s the “Best Buddies” program, in which typically-developing college students pair up with adults with intellectual disabilities in their communities. My sister Kate had a “best buddy” in college, and her relationship with S, who had Down syndrome, was one of the most meaningful friendships of her time there. My sister Elly also had a buddy who our whole family came to know and love. My favorite story about a best buddy experience came from the man who–alongside his “best buddy” of twelve years–completed the NYC Marathon (link to the TODAY show interview in the comments below). They clearly had a mutually encouraging relationship that led to personal transformation for them both.

In other words, buddies are awesome.

And yet I cringe a little bit when I hear the word, or when I think about someone being Penny’s buddy. It sounds pejorative to me. It sounds one-sided. It sounds immature. The dictionary definition of buddy doesn’t support me here. It says a buddy is a chum, a friend, a comrade. And certainly I want Penny to have friends, and I utterly support programs that provide social support to make those friendships possible.

Penny and I often talk about finding “mentors”–people who know more than she does about something where she wants to learn and grow. And I wonder whether one of the reasons I don’t like the word buddy is that buddies are often not just friends but actually more like a mentor? Or maybe I’m just making too much of it all.

The picture above is of Penny and Marilee with their former babysitter Maddie. Maddie started to babysit Penny in the summer when Pen was 1. 11 years later, they are friends, and Maddie is of course more than a friend. She’s a role model (and someone who went on to get a degree in special education and teach kids with special needs) and a mentor and a beloved friend of our family. I could not be more grateful for people like Maddie in Penny’s (and my!) life.

PrevPreviousThoughts from April 30- May 4, 2018
NextIs the Word “Buddy” Helpful in Programs for Kids with Disabilities?Next