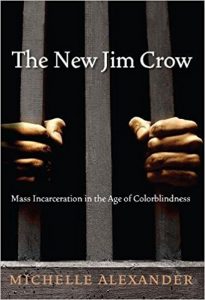 As a white person who grew up in neighborhoods with very little crime, the police and the court system seemed utterly trustworthy. Sure, mistakes were made sometimes but that’s just human, I thought.

When I was in college, I signed up to be a pen pal with a woman in prison. I corresponded with one woman for about a year, but we fell out of touch when she was moved from one prison to another and I couldn’t obtain her new address. Truth be told, I felt uncomfortable when she wrote about how she had been imprisoned unjustly. She described the situation behind her arrest, which came down to being in the wrong place at the wrong time. Her story didn’t shake my view of the courts or police work. I just assumed she was lying.

I signed up to correspond with another prisoner in my early twenties, and we established a longer friendship. She was a mom already, so she had wisdom and comfort to offer me when Penny was born and she loved telling me about her own teenage daughter’s accomplishments. She, too, described the details of her imprisonment in terms that made no sense to me. She admitted what seemed to me a very minor drug infraction. I knew plenty of people who had used drugs in high school and college. I even knew some who had sold them. None of them had ever gone to jail. Certainly not for a decade. The crime she described seemed parallel to those friends’, nothing worthy of all that time behind bars, all that time away from her daughter. Nothing worthy of naming her a felon for life. In this situation, because of the friendship that had developed, and because I had begun to learn a little more about how our criminal justice system can bend in unjust directions, I felt uncomfortable with the story not because I thought she was lying but because I thought she might be telling the truth.

For her to be telling the truth–that possessing a small amount of an illegal substance would take her away from her daughter and put her behind bars for a decade–didn’t just make my heart heavy for my friend. It disrupted my view of the world. Where was the justice in the incarceration of a young mom who screwed up? And what if there were hundreds and thousands of other women (and men) like my friend, who had committed crimes and yet were experiencing punishments that far outweighed the severity of the crime? Meanwhile, my friends from college who had done similar things were working in investment banks and going to law school. My college friends were white. My friend in prison was black.

But then she got out of prison. Her daughter graduated from high school with honors. They moved. We fell out of touch. And I buried my distrust of the system, needing to believe that this nation I love is really and truly a nation of liberty, a nation of justice, a nation for all.

I still very much believe in the principles of our nation, and I still believe we can live into those principles. But I also believe that the brokenness in our system is very real and amounts to real injustice disproportionately directed towards men and women of color. The book The New Jim Crow by Michelle Alexander was probably the most helpful read (though I have also heard that James Foreman’s Locking Up Our Own is worth reading and if you are a more visual person Ava Duverney’s film 13th summarizes a lot of The New Jim Crow but just can’t provide the same depth due to time constraints). Alexander details story after story that parallel my friend’s experience. For a shorter introduction to some of the problems with the system you can also check out an article from the Atlantic regarding plea bargains.

I still feel pretty paralyzed as a white person who enjoys the protections of the law and the courts. I don’t worry about minor infractions like driving over the speed limit. I am grateful for the sacrificial service so many men and women in uniform and in the legal profession offer to my fellow Americans. And yet I also deeply long for the same protections I enjoy to be distributed among communities of color. I long for people like my friend who was in prison to be given a second chance instead of being branded a felon for the rest of her life.