Thoughts from October 9-13, 2017 on Anxiety, Sickness and Friendship

I’ve written a gazillion times about how my enduring concern for Penny is friendship. I now realize I’m praying for good friends for all our kids, and making and keeping good friends is an issue through all our lives. Still, a persistent problem for people with Down syndrome is loneliness, so having friends is a serious concern and need.I have also written about how Penny’s two best friends from elementary school didn’t make the transition to middle school with her–one moved away and another went to a different school. So I was worried, again, this year. And, again, it has been great. Penny has gone over to friends’ houses and had them to our house. A friend is coming home after school today and they will go to a homecoming game together. I walk with Penny in the hallway of her school and multiple kids go out of their way to say hi or run over to her to give her a hug. She talks about sitting with different people at lunch–some old friends and some new.

My friend Jennifer Grant has told me about her daughter Isabel, who has been friends with Sam–a young man with Down syndrome–for a decade now. Isabel’s and Sam’s relationship has been an image that brings light and hope to me as a mother, seeing that a true friendship exists between the two of them in which both of them give and receive. My friend Margot Starbuck interviewed them recently. I think you’ll love seeing them together. 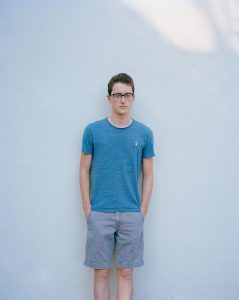 My hunch is that some of my worry is a product of privilege, of being insulated–both protected and cut off–from some of the historical human concerns like where will I live and what will I eat and will we survive. Wealth, education, safe neighborhoods, marriage, WASP heritage–all these things provide a measure of stability and security that most human beings throughout history haven’t had. And yet even with these measures in place, even with this practical assurance of stability, I worry. My natural human instinct is to turn in on myself rather than to allow that security to free me up to turn outwards towards others.

I’ve written a whole chapter about this in my new book, but I thought I’d raise the thoughts here and also share this article about anxiety in teenagers.

My hope is to turn away from anxiety and towards peace, towards the source of all peace, so that I can be freed up both for my own healing and to be an agent of healing in a wounded world.

I am allergic to change. I realized this back in September, when we were driving back from the beach and my head began to fill with fluid and I sneezed a dozen times in as many minutes. The air quality in the air-conditioned car hadn’t changed. But I was headed into the school year, and my body responded as if an alien substance had invaded my nostrils.

We talk about sickness as something we need to fight, like an alien has invaded and we must come at it with everything we’ve got. I’ve started to wonder whether sickness, and pain, are instead messengers I need to listen to.

I have recently realized that I start to get congested when I’m under stress of some sort. I used to always see it as sickness. An inevitable process that would probably land me in bed for the better part of a week. But three times in the past six weeks I have come close to the brink of illness and walked away.

There was the “allergic reaction” in the car on Labor Day, which I mentioned above. Then, I kept telling myself that I didn’t need to be afraid. I listened to the message my body was telling me, and I prayed about it and thought about it and took care of myself, and by the next morning, I was fine.

I can’t remember what happened the second time.

But last week on Friday, I was driving with Penny back from a doctor’s appointment in Boston. The traffic was horrible, which meant I was going to be two hours late to a dinner party for forty people in our home. (I had known I would be cutting it close. But two hours late!?!) My throat was tight and itchy and my head started to fill with fluid. I texted my husband with frantic updates and he assured me that it would be just fine.

And then I started to recognize that I was anxious about something that I couldn’t control, and that I had prioritized our daughter’s health over the dinner party, which was as it should be, and I realized that I wasn’t perfect and I never would be and I was still loved and there was still grace.
I came home and joined the end of the dinner party and had a cup of tea and got a good night sleep. And I was all better in the morning.

I don’t know how this all works, and I don’t mean to say that sickness or pain are things that we control or that we should blame ourselves for or that we would all be healthy all the time if we just got our thinking straight. But I am starting to see all the little pains and illnesses I bump up against not as foes I need to fight but as messengers I need to listen to. 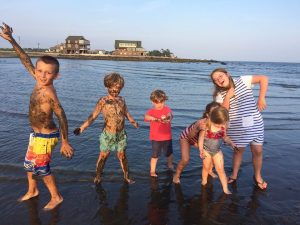 I found out recently that Penny might need hearing aids. She’s had mild to moderate hearing loss since birth, and that hasn’t changed. But now that she is in middle school, and given how much of a difference hearing clearly can make, it is probably time to give her ears some support.

Penny has a lot of minor supports—orthotics in her shoes, glasses, a retainer, thyroid medication to take daily, physical therapy, occupational therapy and speech therapy at school. And then she also wears a brace twenty hours a day to try to keep her back straight and prevent her scoliosis from progressing. All of this amounts to a lot of time—lots of doctor’s appointments and lots of phone calls and lots of record keeping.

And yet she doesn’t see her life in terms of its limitations. She has taught us that we don’t need to see it that way either.

I’m not saying I never get grumpy about the amount of driving we do, or the five hours in traffic last week, or that I never feel overwhelmed by the sheer responsibility of keeping all these appointments straight and making sure we follow through. I do.

And I’m not saying she never wells up with tears over having to put the brace back on, or that she never resists wearing her orthotics because what girl wants to wear sneakers all the time and not the fancy silver flip flops that are terrible for your feet?

But I am saying that she expresses the disappointment, and then she does what she has to do without complaining or resisting. And so I try to do the same.

I mentioned last week that I have compiled a series of essays I have written over the years of being Penny’s mom. The final “essay” is my favorite of the collection because it is not an essay at all. Rather, it is an interview with Penny. There I asked her a question about her life and she answered, “My life is filled with caring, loving people and joyful happiness.”

PrevPreviousMissing Out on Beautiful: New Free Ebook about Down Syndrome and other thoughts
NextA Day in the Life with Down SyndromeNext