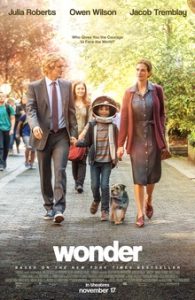 Last Wednesday, we took the kids to see the movie Wonder. All three of them had read/listened to the book more than once, so they were familiar with the story of Auggie Pullman, a 5th grader with a wry sense of humor, a loving family, a tenacious spirit, and significant facial deformities. In the book and movie, we meet Auggie as he goes to school for the first time in 5th grade. (He has been homeschooled up to this point due to his 21 surgeries.) I’ve commended the book before, and I commend the movie as well, especially because of the conversation it led to at dinner afterwards.

So first we asked the kids, “Who do you relate to in the movie?”

Penny went first: “Auggie. Because, you know, I was born with something too.”

William said, “Jack Will.” He didn’t choose to elaborate. (This is the kid who becomes Auggie’s good friend but who also betrays him at one point in the story.)

Marilee shared, “I related to Charlotte because she was nice but also just being a girl.” (I was very surprised—and a bit relieved—that Marilee didn’t say Via, Auggie’s sister, who struggles with the way her family orbits around Auggie’s needs and feelings and seems to neglect her in the process.)

Then we asked, “Of all the characters, who would you most want to be?”

Again, Penny went first: “Jack Will, because he was kind.”

William agreed. (And I do too. Jack is awesome. Very human in that he does care what other people think, but ultimately someone who chooses meaningful friendship over surface social approval.)

Marilee surprised me. She said, “Auggie. I would want to be Auggie because he was kind and strong.”

Marilee, mind you, literally got hives when she was four years old at the thought of wearing glasses to school since no other kids had glasses. She also routinely asks for gifts in terms of clothing that older kids wear. In other words, if there is any one of our children who cares about physically conforming to social norms, it is Marilee. But she cares about more than social norms, and this movie gave her a vision of what it might look like to take social risks for the sake of true friendship.

Our kids are growing up with the reality of life with a disability. Penny says she has never been bullied, never encountered the teasing that Auggie had to endure in this film, and we hope and pray we can protect her as well as her siblings from the meanness out there. But assuming we can’t actually protect them from meanness we can talk about what it means to be kind even when it comes at a social cost, about loving people for who they are rather than judging them for their appearance.

Nearly twelve years ago, our baby girl was born. Her face looked different than the other babies born that day. Some would call her features abnormal. We would call them beautiful. And if we can teach our children to see the world through eyes of love instead of judgment and fear, they will be able to see all sorts of beauty too.

PrevPrevious3 Resources to Help Us Overcome Polarization
NextAJB Recommends: Tattoos on the Heart and Barking to the Choir by Father Greg BoyleNext