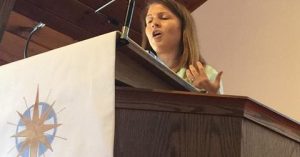 Do you ever feel like you have too much doubt to have faith? Too many questions about God and not enough encounters with God? I had a chance to preach at our church yesterday about the disciple I call “faithful Thomas.” He is more often known as “doubting Thomas,” but I see him as a model of faith and encouragement for all of us who have questions and also hold on to hope that God is real and cares about us. Here’s the link so you can listen along.

It’s so easy for people to think of people with disabilities in terms of deficits, challenges, weaknesses. Our medical and therapeutic and educational systems assume it. Any evaluation, even those done by the most sensitive and caring professionals, will come up with a list of all the areas in which a child with a disability doesn’t measure up. I need to prove Penny’s deficits in order for her to qualify for certain programs and supports. There is purpose in all of this, of course, but it also contributes to a false cultural narrative that assumes people with disabilities are, well, unable to function, unable to contribute, unable to bring meaning and value and joy and light to the world.

The church is another example of an institution which in general has a desire to show compassion and care for people with disabilities but has often failed to recognize the gifts and possibilities inherent in every human life, including the lives of those with disabilities.

SO I am thrilled to announce that I wrote a cover story for Christianity Today called “Willing and Able: the ministry of the disabled” (The “of” is supposed to be in italics, but Facebook doesn’t have that feature–the point is that this isn’t ministry TO or FOR, but ministry done by people with disabilities for others.).

In this article, I reflect on the ways Penny has her own ministry in our community, and I also tell stories about churches, individuals, a L’Arche community and a Friendship House–all places where people with autism, Down syndrome, and other developmental disabilities care for and support and minister to the people around them.

The photos for this piece are beautiful, and the stories testify to the tremendous gift all people can be to those around them, if only we start to assume we need one another, every one of us.

(P.S. The photo comes from a short trip Penny and Marilee and I took last week to South Carolina . It was a sweet time for us all together–lots of time in the pool, lots of laughter, lots of good food, and so many reminders of the blessing of our life as a family. It was a week characterized by fullness and joy.) 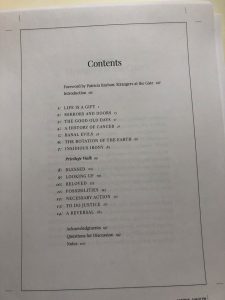 Here are the stages of writing a non-fiction, memoirish book:

1. Live the story
2. Struggle to write the story
3. Publish the story and learn even more when people respond and ask questions and ask you to talk about it more

The picture here is the “first pass” at not just the words the book will contain but the way those words will look on the page. Here’s a sneak peek at the Table of Contents.

You can pre-order it now.

Bryan Stevenson’s willingness to hope for a good future in the midst of a horrific past depends upon our collective willingness to face the pain of the present moment.

Stevenson is the leader of the Equal Justice Initiative, and his organization has recently unveiled a monument that reckons with America’s history of lynching. The images in this article convey some sense of the power and thoughtfulness of the way the monument has been constructed.

I read Stevenson’s book Just Mercy a few years ago, and I was struck not only by the tragedy of injustice he describes, but also by his faith that God is at work even in the midst of that despair, even in the midst of a sordid history.
As Campbell Robertson writes for the New York Times:

“Mr. Stevenson, whose great-grandparents were slaves in Virginia, has written about “just mercy,” the belief that those who have committed serious wrongs should be allowed a chance at redemption. It is a conviction he has spent a career arguing for on behalf of clients, and he believes it is true even for the white America whose brutality is chronicled by the memorial.”

Facebook friends, I need your help! I’m working on refreshing my website, and I’d like to have a better sense of who reads what I write and why you read it. Will you give me two minutes of your time right now and answer a few questions? Here you go.