Once a week I compile the thoughts I’ve shared on my Facebook Author Page into one blog post. As it happened, last week on Monday I wrote a post (see May 21 below) about what it takes for people to change their minds. Then on Wednesday, I received a message from a woman whose family has decided to travel around the United States for a year (they sold their house, quit their jobs, and bought an RV) in order to get to know people who they have only thought of in stereotypical terms in the past. You can watch a video explaining their journey here. As for the rest of the week’s thoughts:

What does it take for minds to change? Can you think of a time when you changed your mind about something that really mattered to you? Maybe it was a political issue or a religious ideal or even an attitude towards a group of people.

I listened to this interview that On Being host Krista Tippett did with Derek Black, a former white nationalist, and Matthew Stevenson, an orthodox Jew who befriended Derek, and I highly recommend taking the time to hear their whole conversation.

Many things struck me about it, but one was that Derek said three things combined to change his mind. One, he was welcomed by “the other” as a friend, not as a project and not as an enemy, because Matthew decided to invite Derek to a weekly Shabbat dinner for two years. In those dinners, they didn’t discuss white nationalism. Two, individuals from that dinner asked Derek if they could discuss his ideas about white nationalism in private. Three, his ideas were adamantly and vocally opposed on campus.

This combination of friendship, private disagreement, and public disagreement all combined so that Derek eventually saw the flaws in his own arguments about white nationalism and came to renounce those views even though it meant a severe break from his past and even his family.

This story speaks in many ways to our current moment. There’s an important place for vocal disagreement, protest, and outrage. There’s an equally important place for friendship, quiet but honest disagreement, and love and care for one another. For any of us who have passionate opinions about religion, politics, or other controversial topics, these young men are a model of how we can learn from and grow with each other.

So here’s my question–when is the last time you’ve had dinner with someone you knew you disagreed with about something really important to you? How did it go? 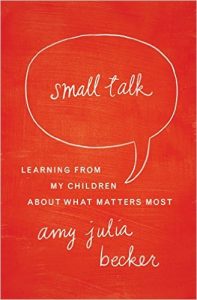 So I’ve been thinking about contentment. The dictionary tells me it is a “state of happiness and satisfaction.”

Five years ago, I was at a low point of discontentment: yelling at the kids, unhappy with my body, lonely, directionless.

Now I feel really grateful for our kids, my body, my friendships, my vocation as a writer and thinker and speaker. What changed?

In some ways, not much. I live in the same house, though we’ve been here longer so I’ve gotten settled and met people. I live in the same body, though I’ve drastically changed my eating (and drinking!) habits and I exercise regularly now. I have the same vocation, though I think it is now tethered to a desire to be faithfully fulfilling my purpose rather than a desire to succeed.

I used to think that being content meant being apathetic, not wanting to grow, just staying the same. I’ve learned that contentment is more akin to gratitude, and therefore that it actually spurs growth. It allows me to take risks and try things because who I am is not dependent upon success (or failure). These days I’m more willing to try new things because I’m happy and satisfied with where I am now.

There’s a place in the Bible where Paul writes about learning how to be content in all circumstances. Contentment, he writes, comes from being strengthened by God. Not by apathy, but by an ongoing relationship with the power that created us, the power that strengthens and grows us up into who we are meant to be.

For any of you who are struggling with discontentment right now, I write further about my own struggles and growth in this area in Small Talk, which happens to be on sale on Amazon today for $5.95.

In the chapter on waiting, I write about how Penny has taught me about contentment:

“When Penny was born with Down syndrome, people said she would help me learn patience. I assumed I would learn patience because it would take a long time for her to accomplish things. Books and doctors told me I would have to wait for her to talk and walk and learn her colors and use scissors.

“They were right, I suppose. Penny walked when she was two, and even then she wobbled. She spoke a few words by the time she was three. But I never felt as though I was sitting around waiting for those things to happen. She was always learning the next thing, whether it was a new sign language word or a new sound or the next motion in pulling herself up. I rarely felt impatient for her to do more or for her to do it more quickly, mainly because she seemed so content with where she was.”

There it is again–growth connected to contentment, happiness with where I am right now being the fuel for change in the future. I can’t say there was a magic formula to get to this place. Circumstances changed for the better. But prayer and saying thank you also played a big part. So if you’re struggling with unhappiness or dissatisfaction, maybe prayer, or Paul’s words to the Philippians, or even Small Talk can help you move to a place of contentment and growth. 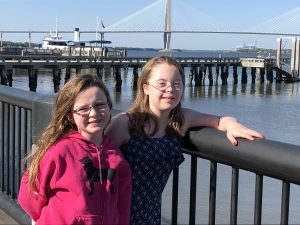 I am hoping to write a long-form personal essay about reading The Trumpet of the Swan with our kids. I read it five years ago with Penny and William, and Marilee and I are reading it together now. If you haven’t read it, it’s by E.B. White (who is more famous for Charlotte’s Web, but in my opinion Trumpet is even better), and it tells the story of a “defective” trumpeter swan named Louis. Louis can’t speak. In today’s words, he has a disability.

Again, more to write about this somewhere, but you all get the early pieces, and as I was reading tonight, Marilee said, “Well I know he gets a voice by the end of the book even though you won’t tell me that.”

“Because how can it be a happy ending if Louis doesn’t learn to speak?” she said.

Well, my dear, wait and see. It turns out happy endings are possible even with disabilities.